From Paravia Wiki
Jump to navigation Jump to search

Dier Kenton Vale is a valley located in Vastmark, Shand, surrounded by steep, faulted shale mountains. It is part of the traditional grazing land of the Vastmark shepherds.

The valley is shaped like an uneven bowl, with a mild, low rise to the west rising up to a high-swept cliff wall rimmed with mountains to the east. The raised shoulder of a knoll divides the swale of the valley, somewhere towards the east side.

This valley is the site of a catastrophic confrontation between Arithon and Lysaer's forces following the ransom exchange at Ostermere. Lysaer's warhost surrounds the Vastmark region over the summer and fall in Third Age 5647. Arithon's smaller command of clansmen and shepherds gradually bait the advancing companies to Dier Kenton, where an illusion-wrought campsite on the knoll leads the warhost to convergence. The drawing shows troop movements during this leg in the Vastmark campaign. It may help you visualize the battle, but is not intended to be authoritative. 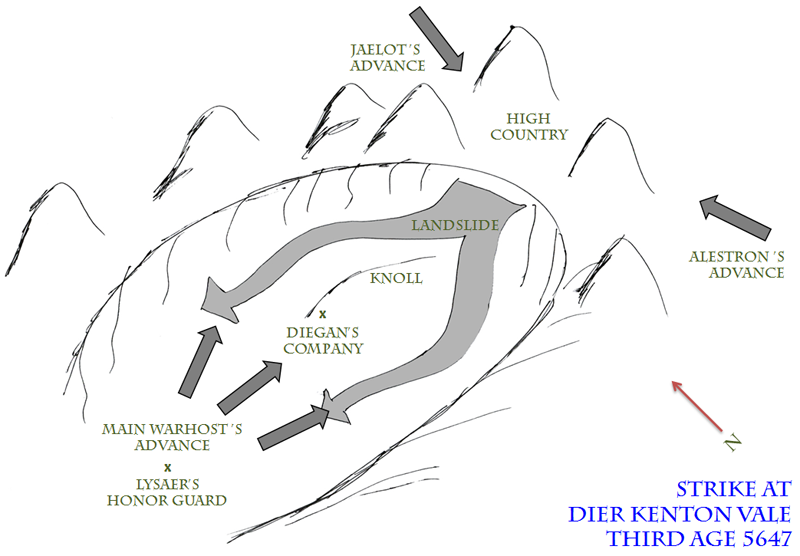 On signal, Lysaer's advance guard peels away with a single company as an honor guard, while the main body of the warhost presses up to the knoll. A burst of light signals companies from Jaelot and Alestron on the far sides of the mountains to begin an encircling ascent.

Just as Diegan's advance company arrives at the knoll to find it abandoned, Arithon uses his shadow mastery to cloak the valley in darkness. Lysaer responds with tempered counterblasts of light, and the resultant vibrations trigger a massive avalanche of shale from the eastern rim. Of Lysaer's 40,000 troops, over 28,000 are immediately buried in the landslide. Diegan's company of forty-two veterans is saved by the natural topography of the knoll, which channels the debris to either side. Lysaer's honor guard survives far from the landslide, along with other companies where the slope of the land is very shallow. Under fire from clan archers and finding no navigable passes into the mountains, Lysaer orders the 196 remaining survivors in the vale to retreat, intent on rejoining the other armies from outside of the vale.

The 12,000 remaining troops from Alestron and Jaelot still outnumber the Arithon's archers by 8 to 1. The southern assault is led by Keldmar s'Brydion and mercenaries from Alestron. This group is hampered by Dakar's slipshod magecraft. By nearly skirting the Law of the Major Balance, Dakar creates a pale green mist which ensorcels the thoughts of the troops forced to march through it. While under the spell of the mist, clan archers strike the helpless soldiers, based on the position of their pikes, which stick up through the mist.

The northern troops are mainly comprised of men from Jaelot and led by a driven man who was slighted during Halliron Masterbard's last visit to the city. Their attempts to seal off the mountains are hampered by archers and shadow. This flank manages to gain an advantageous position, forcing Dakar to conjure a rendition of Dharkaron's Chariot in the sky. This breaks Alestron's ranks into chaos, allowing the clansmen and shepherds under Arithon's command to flee to safety towards the south.